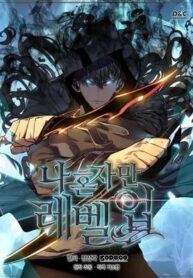 Only I Level Up Novel

I Alone Level-Up known as Solo Leveling is a popular light novel covering Action, Adventure, and Fantasy genres. Written by Chu-Gong (추공) in February 14, 2014. It was then serialized as a novel in Papyrus that ended with 14 volumes and 270 chapters.

The Ant King (왕) was an immensely powerful Magic Beast born from the Ant Queen on Jeju Island where an S-Rank Gate had opened. The Ant Queen, who was monitored 24 hours a day by a Japanese satellite, showed a massive decline in its magical energy. It was later learned that this was due to the Ant Queen birthing her strongest child, the Ant King, for the sole purpose of beating strong Hunters. The King was one of the few magic beasts capable of communicating with Sung Jin-Woo similar to Baruka of the Red Gate and Kargalgan. Through his ability, Gluttony, the Ant King was able to learn human languages including Korean after devouring powerful S-Rank hunters. It is one of the most powerful magic beasts introduced within the series, with no hunters present during the Jeju Island Raid being able to fight against it, excluding Sung Jin-Woo. The Ant King is the primary antagonist of the Jeju Island Arc. To view the entire article, click Ant King.

10 years ago, after “the Gate” that connected the real world with the monster world opened, some of the ordinary, everyday people received the power to hunt monsters within the Gate. They are known as “Hunters”. However, not all Hunters are powerful. My name is Sung Jin-Woo, an E-rank Hunter. I’m someone who has to risk his life in the lowliest of dungeons, the “World’s Weakest”. Having no skills whatsoever to display, I barely earned the required money by fighting in low-leveled dungeons… at least until I found a hidden dungeon with the hardest difficulty within the D-rank dungeons! In the end, as I was accepting death, I suddenly received a strange power, a quest log that only I could see, a secret to leveling up that only I know about! If I trained in accordance with my quests and hunted monsters, my level would rise. Changing from the weakest Hunter to the strongest S-rank Hunter!

Return of the Female Knight

The Second Coming of Gluttony

Warlock of the Magus World